In this section women film-makers compete with their debuts for the prize of Best International Debut Feature Film, which comes endowed with € 10,000.

Through the debut award as conferred in Cologne, Internationales Frauen* Film Fest Dortmund+Köln aims initially to honour the work of upcoming film direction talent. Yet the award is also intended to provide women film-makers already successful in the field of short films and documentaries with the opportunity of pursuing further projects after the completion of their first feature film. In this way, in alternation with the International Feature Film Competition for Women Directors presented in Dortmund, it is hoped to create a continuing framework for festival and promotion activities.

A jury made up of three international film specialists confers the Debut Feature Film Award.

Should I Stay or Should I Go?
2022 sees film nominations from China, Costa Rica, France, Haiti, Romania, Serbia, Spain and the USA.

What are your plans? Where do you want to go? What can you achieve? To what extent does your background, your environment, or world politics influence your development and dreams? These questions are central to the characters and stories in many of the debut films, and they often follow a non-linear understanding of space and time. The cinematic journey around the world takes in everything from improvised film forms and semi-documentary narratives to screen-busting opuses in black and white. Their protagonists have a strength and resilience that thrill and inspire.

»Films that impress me; artists who are extremely inspiring; colleagues who are great to work with – and the opportunity to continue to work away on one of life’s central socio-political isues, gender equality, that’s what Internationales Frauen Film Fest Dortmund+Köln represents for me. And a whole lot more.«

Jennifer studied Art History & Voice (BA) at Juniata College, USA, Cultural Studies & Feminist Art Theory (MA) at the University of Leeds, UK and Classical Voice (Diplom) at the Hochschule für Musik und Tanz Köln. She has worked in the (film) cultural sector since 1998, curating the Cologne Short Film Festival since 2009 (competition and special programmes), EMAF Osnabrück (competition 2011), feminale (programme and co-direction 2000 to 2005), and collaborating on film and lecture series, workshops and retrospectives on Albert & David Maysles (with a master class), Lynn Hershman Leeson, Maya Deren, Lech Kowalski, Tony Buba, Jennet Thomas, Nelly Kaplan, »Groupies in Film«, among others. She has managed projects for the International Short Film Festival Oberhausen, goEast Film Festival, Creative Europe MEDIA, and has been a jury member at the One World Festival Prague, Sarajevo Film Festival, Seoul International Women’s Film Festival. Since 2013, she has worked in public relations for international arthouse documentary and feature films. She is head of press communications at KERN DES GANZEN Agency für Filmkommunikation in Cologne, and lectures at the institutes for media and cultural studies at the Universities of Düsseldorf and Cologne. 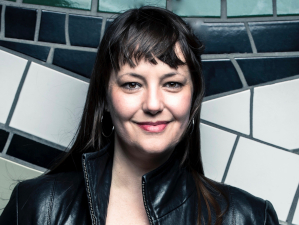 The auteur film-maker produced three feminist classics with The Cat Has Nine Lives (1968), Erika’s Passion (1976) and Sleep of Reason (1984, German Film Award). She has made over 20 films, and their visual language has repeatedly defied cinematic conventions. Her film The Old Song (1991) examined East-West realities following German reunification. Since 2002, she has been a professor of film at the University of Central Florida. The section IFFF REVISITED will be showing The Old Song and Don’t Talk About Fate.

The film-maker, playwright and author lives and works in Harare, where she set up her own production company Nyerai Films in 1992. She graduated from the German Film and Television Academy Berlin and has been involved in numerous Zimbabwean feature films, including such classics as Neria (1991), which is based on her screenplay, and Everyone’s Child (1996). She campaigns throughout Africa for women’s rights and actively supports women film-makers. In 2021, the PEN Pinter prize-winner received the Peace Prize of the German Book Trade. She is currently working on several film projects. The festival’s FOCUS section presents her prize-winning musical Kare Kare Zvako – Mother’s Day.

A small room. A young woman asleep in bed. She’s rudely awoken by her sister, other people enter. There’s no […]

Student Freda lives with her family in a popular but poor neighbourhood of Port-au-Prince. Her mother Jeanette supports herself and […]

In Extremadura, a province in the southwest of Spain, a village awaits a great flash of light. Anything to shake […]