»FEELINGS OF RESENTMENT WITHIN GERMANY ARE ONE OF THE BIGGEST TABOOS IN OUR SOCIETY,
AND NEITHER SIDE OPENLY ADMITS HOW STRONG THE RESPECTIVE PREJUDICES REALLY ARE.
AND SO THEY JUST BURST OUT.«
JANA HENSEL, ›WER WIR SIND − DIE ERFAHRUNG, OSTDEUTSCH ZU SEIN‹ (›WHO WE ARE − THE EXPERIENCE OF BEING EAST GERMAN‹)

Who we are for me was the overdue lesson I needed to adjust my view of East Germany. Following reunification, the phrase »five new federal states« made the angle of discussion from that point on very clear. The cultural hegemony of the West over the East makes me uneasy. It also fuels my doubts as to whether it’s even acceptable to make a film programme in the West about the East. I asked curators and film-makers, especially those from eastern Germany, which films are important for the postreunification period and why. In the context of film funding oriented towards Western Germany, what was actually funded at all? Using various different voices, this attempt to find East-German experiences in films opens up a welcome avenue for contemplating breaks, utopias, new beginnings and marginalised perspectives. The films centre around people who use subversive strategies to expand their room for manoeuvre. Although most of the women film-makers from three generations have an East German background, East and West have long been interwoven in their biographies and films.

There are often references to highly symbolic places whose decay symbolises the loss of the social fabric. Susann Maria Hempel is interested in remnants of the past, those left behind, and in them discovers, for all their melancholy, a deep poetry. In blueberries – cerne jagody, when the ancient beech tree, loved and cherished, one day simply disappears − another victim of the open-cast lignite mining in Lusatia − this is presented with such force that the shock goes right through you. It is not uncommon for the act of film-making itself to be an effective means of resistance.
These films stretch right up to the present day, whether through formulating early on the reasons for the political rows we are confronted with today, like Petra Tschörtner’s melancholy swansong to the Prenzlauer Berg quarter, or because they weave their narrative threads over many decades, like Ines Johnson-Spain’s revision of denied black identity in Becoming Black. They are biographies that would be unthinkable had the GDR not existed, valuable counter-memories that open up spheres of possibility and are different because within them »the West« is not the norm. The films can be regarded as a phenomenon of crisis management − many wounds are deep-seated. »The non-recognition of one’s own biography in different generations is something I have also experienced in my own environment. This general sentiment gave me the starting point to make the film,« explains Therese Koppe.

Annekatrin Hendel argues that it is especially films made by women that question mainstream narratives of united Germany. The emancipated East-German perspective has existed throughout − both in front of and behind the camera. This position produces important but rare images for which there is actually no room in the reunified Germany, and which harbour a great number of inspiring surprises. I am still struggling with the question of what »East-German experiences« actually are.
Betty Schiel 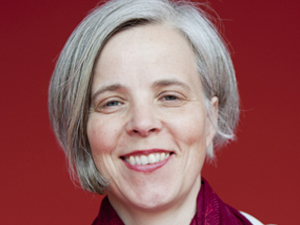 »In a country where any deviation from its norm was considered an existential threat, the birth of a black child […]

»…now we’re getting our butts kicked by the West, that’s what it looks like. Kids, some are against it, some […]

»Here we bid farewell and let mourning take place […] If there is an accusation, it will not be voiced.« […]

»The coalfields spat us both out. You dug them up once. We wanted to make a difference.« Grit Lemke The […]

After the war and various demolition raids, only one building is left standing at Potsdamer Platz directly next to the […]

The film-maker’s cinematic obituary in memory of the old municipal theatre in her hometown of Greiz. The film material, slides […]

Enemy of the State

»I can always see the bloody West-German questions coming a mile off.« Paul Gratzik An angry old man in a […]

From Us To Me

»Asked about the openness and emotional power of the interviews, one of the participants said: ›We’ve been waiting all these […]

The artist’s memories of her childhood in the GDR. Astonishing as it may seem, the title Kind als Pinsel (child […]

»I am only interested in the form once everything else is in place. The contradictory. Suspense. Tension. The beauty in […]

my castle your castle

More
12»
Instagram
@frauenfilmfest
Facebook
@frauenfilmfest
This website uses cookies and similar technologies. By clicking on "Accept" you accept this processing and also the transfer of your data to third parties. Further information, including information on data processing by third parties, can be found in the settings as well as in our privacy policy. You can adjust the use of cookies at any time via your cookie settings or reject it.