»I SO APPRECIATE OTHER PEOPLE’S BODIES AND I THINK I AM A KIND OF PERSON THAT THEY ARE COMFORTABLE
WITH. […] I CELEBRATE THEM THROUGH MY WAY OF FILMING.«
BARBARA HAMMER IN ›QUEER GENIUS‹

This year’s desired! programme places the focus on bodies – vulnerable bodies that are a reflection of the way society treats them. Physicality becomes a place where desires, norms, mortality are negotiated by society.

Illness and death are presented by the media as exceptional situations, and rarely in their normality and omnipresence. In her film, Lana Lin shows the relevance of Audre Lorde’s thoughts.
Following her mastectomy, Lorde is asked why she turns up at the breast cancer centre without the pink woollen prosthesis she was given. She is advised to wear it for her own good, but also for the morale of the centre. She writes:

»Women have been programmed to view our bodies only in terms of how they look and feel to others, rather than how they feel to ourselves, and how we wish to use them. We are surrounded by media images portraying women as essentially decorative machines of consumer function […]. I am personally affronted by the message that I am only acceptable if I look ›right‹ or ›normal‹ where those norms have nothing to do with my own perceptions of who I am. Where ›normal‹ means the ›right‹ color, shape, size, or number of breasts, a woman’s perception of her own body and the strengths that come from that perception are discouraged, trivialized, and ignored.«
Audre Lorde, ›The Cancer Journals‹, Special Edition, 2006

The female body is – as Lorde shows – the body that is meant to be gazed at by others. She stresses the need for appropriation and a shift away from being seen externally towards embodiments. In the film Las Hijas del Fuego, the film-maker and a collective of women experiment with the question of appropriation of images that are intended to trigger desire. How do we visualise sex in a queer-feminist way? How can lust be visually imagined and represented?

Amber Bemak’s and Nadia Granado’s concept of film bodies and also their enactment of sex tell of violence and boundaries, and bodies assume a demanding role. They take the filmic conditions in which female bodies appear as a starting point to investigate and change these mechanisms in the medium.

How can we develop sexual fantasies when faced with simultaneous violence in everyday images? It’s not about abandoning, it’s about experimenting, trying and rearranging. In relation to the discussion about sexualised violence, Carolin Emcke wrote:

»If power functions not only vertically, if power is something that always arises when people connect and interact, if power denotes a potentiality – then this is what we should try to do: negotiate with each other, seek new perceptions, new definitions, new images, new languages, new forms of intimacy, desire.«
Carolin Emcke, ›Ja heißt Ja und…‹, 2019

Given that film and cinema play such a key role in defining bodies and the norms that constrain them, we look for other ways to see bodies, talk about lust, face mortality and stage violence not in its own right but in the context of the urgent need for it to stop in so many aspects of our lives.
Natascha Frankenberg

Natascha Frankenberg is a film and media scholar. She works in the cultural film education field, as a curator for film festivals and lecturer at various universities. Her PhD dissertation examined the subject of temporality at the nexus of film and queer studies, focusing on documentary work in queer cinema. 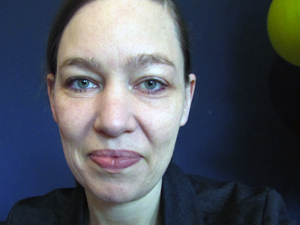 »Where other than at the Internationales Frauen* Film Fest Dortmund+Köln do I get the chance to work with such focus on film from a queer-feminist perspective? And to give a platform to films that intervene in normative structures and audiovisually expand our realms of possibilities and fantasies, and thus hopefully also make realities changeable?«

The Sea Runs Thru My Veins

Four protagonists talk about their ideas of happiness, which are closely linked to perspectives of queerness and experiences with migration. […]

Melina Pafundi allows the androgynous child to speak. The child switches between yesterday and today, and represents a character who […]

Zurura, Zurura: The Smile Blooms is a visually poetic and philosophical essay. In this film, director Marthe Djilo Kamga revisits […]

More
«12
Instagram
@frauenfilmfest
Facebook
@frauenfilmfest
This website uses cookies and similar technologies. By clicking on "Accept" you accept this processing and also the transfer of your data to third parties. Further information, including information on data processing by third parties, can be found in the settings as well as in our privacy policy. You can adjust the use of cookies at any time via your cookie settings or reject it.