After the death of her husband, 70-year-old Claudina has to start over and she moves in with her daughter and grandson. She has a strained relationship with her daughter, but she is very fond of her grandchild. Before long, she meets and instantly falls in love with her neighbour Elsa. Forgotten Roads is Nicol Ruiz Benavides’ feature film debut. In it she creates a world which does not constrain the protagonist in spite of its many stereotypical characters – rather, it opens up new scenarios and opportunities which the director looks for herself in film. She contrasts traditional representations of older women in film – no longer defined by desires and new discoveries – with Claudina who has the courage to start a new life and take chances. The film’s themes defy the boundaries of genre. At some moments there are elements of fantasy – maybe it’s aliens sending Claudina and her grandson light signals? – at others, the film is reminiscent of coming-of-age narratives, which also work with an older female protagonist who finds out what she wants regardless of the normative stories that are expected of her. In this context, the film is a feminist statement in its portrayal of the protagonist, critically examining prevailing representations of women of Claudina’s age. 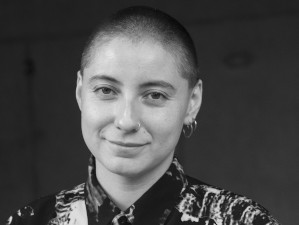 Nicol Ruiz Benavides was born in 1988 in the town of Lautaro in southern Chile. She spent five years studying film at the Universidad Mayor in Santiago, Chile. In 2016, she made her first full-length feature film Forgotten Roads. In 2019, she directed seven of ten episodes of the TV series Los Carcamales, which was made for the production company Kuarzo. Ruiz Benavides is currently working on her second feature film When the Rain Does Not Touch Me.

A Letter to My Mother

Weeks of Sand, Months of Ash, Years of Dust