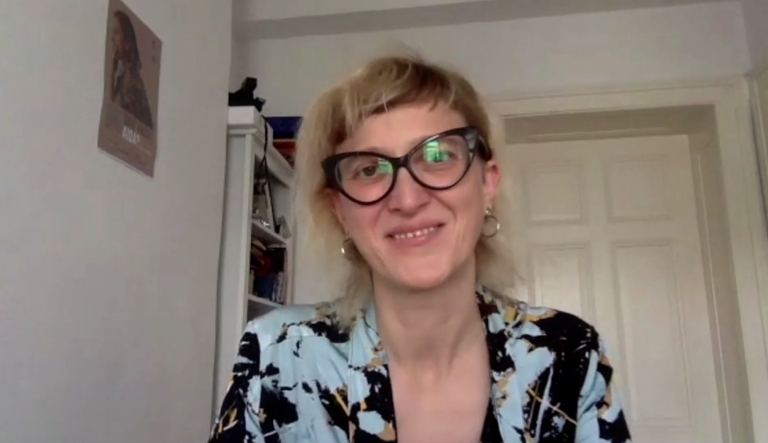 With the online award ceremony, the most unusual edition to date in our almost 40-year festival history has just come to an end. Jasmila Žbanić’ film Quo vadis, Aida?, dealing with the Srebrenica massacre, convinced the international jury and was awarded with the festival’s main prize in the International Fiction Feature Film Competition in a video call by jury member Monika Treut. The prize is endowed with 15,000 € and is shared between the director (5,000 €) and the German distributor (10,000 €) in order to promote the distribution of directorial work by women in Germany. farbfilm verleih will bring the film to cinemas in Germany on August 5th. The international jury was made up of Marga Almirall Rotés (programme director of the Barcelona International Women’s Film Festival), the director Monika Treut and the screenwriter and producer Elma Tataragić.

The jury – consisting of the director Frederike Migom, the curator & film educator Laura Schubert and Gloria Morano, Head of the Young Audiences Programme of the Luxembourg City Film Festival – decided in favor of the Belarusian-Czech animated film Blatt (Lístek) by Aliona Sasková.

The new Shoot – KHM & IFFF Dortmund+Köln Award or Female Artists of the Academy of Media Arts Cologne aims to discover emerging talents, introduce them to a wider audience and support them. It is endowed with 1,000 € and is donated by Equality / Discrimination of the Academy of Media Arts Cologne (KHM). Festival director Dr. Maxa Zoller, the graphic designer Conny Beißler and the curator Nicole Rebmann decided for the artist Angelika Herta and her current film Life Could Be So Beautiful.

The Brazilian feature film My Name is Baghdad by Caru Alves de Souza was very popular with the audience. With this decision, a film from the Films for Kids and Young Adults programme has won the audience award of the IFFF Dortmund+Köln for the first time. The prize is endowed with 1,000 € and was presented to the winner in the evening by Gabriele Kroll for the prize sponsor Sparkasse Dortmund.

Further information, a résumé of the 38th IFFF Dortmund+Köln 2021 and the statements given by the juries can be found in the current press release (currently only in German).

We are a FAIR FESTIVAL

FAIR FESTIVAL. We are particularly pleased with this brand new rating from the AG Festival Work in the ver.di union […]

Our catalog with all content and detailed texts on the entire programme of the IFFF Dortmund+Köln 2021 is ready! From […]

July 10, 10:30 p.m. UNAPOLOGETIC is our contribution to the Cologne Cinema Nights

Do you enjoy the cinema as much as we do? At the wonderful Kölner Kino Nächten (Cologne Cinema Nights) we […]