PLEASE NOTE: Quo Vadis, Aida? runs only on June 16 at 8 p.m. at Schauburg Dortmund. You can’t buy tickets online for this particular screening. Reservations can be made by Email to lindner@frauenfilmfestival.eu until 10 a.m. on the day of the screening. You receive a reservation confirmation by sending the contact form or the QR code. Reserved tickets must be picked up 30 minutes before the start of the screening. You can also buy ticket at the box office.

Bosnia, July 1995. Teacher Aida works as an interpreter for the UN at the Srebrenica camp. When the Serbian army takes the city, her family is among the thousands of people seeking refuge in the camp. During the negotiations, Aida gains access to vital information and becomes increasingly more of a mediator and strategist. As she tries to separate lies from the truth, her frustration and despair grow.

Christine A. Maier’s camera sticks close to Aida wherever she is, allowing us to follow events through her gaze and at her pace. She rushes ever more frantically between the commandant’s office and the camp fence. Quo Vadis, Aida? chronicles just a few dramatic days in the life of a woman whose fate reflects that of a whole generation of women who survived the war in Bosnia. More than 8,000 civilians, almost all of them male, were murdered by the Bosnian Serb army in the Srebrenica genocide and buried in mass graves. It is regarded as the most serious war crime committed in Europe since the end of the Second World War. The role of the United Nations was also severely criticised. To this day, it seems incomprehensible that such a catastrophe could occur right in the heart of Europe. Following her feature film debut Grbavica, Jasmila Žbanić once again provides a vital contribution to processing events relating to the Bosnian war.

Cinematographer Christine A. Maier was awarded with the German Camera Award 2021 for her work and Quo vadis, Aida? was nominated for Best International Feature Film at the Academy Awards 2021. 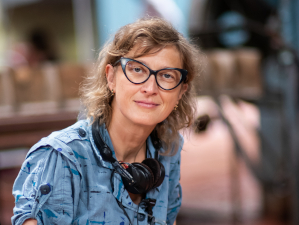 Jasmila Žbanić was born in 1974 in Sarajevo, where she graduated in film and theatre directing from the Academy of Performing Arts. She also worked as a puppeteer in the Vermont-based Bread and Puppets Theater and as a clown in a Lee Delong workshop. Her first feature film Grbavica won the Golden Bear at the Berlinale and countless other international awards. All her films are produced by the artist’s association Deblokada she herself set up. In 2014 she received the KAIROS Prize for outstanding cultural achievement.

The Man Who Sold His Skin