Home Fest 2021 Timetable The Man Who Sold His Skin

The Man Who Sold His Skin

PLEASE NOTE: The Man Who Sold His Skin runs only on June 20 at 6 p.m. at Schauburg Dortmund. You can’t buy tickets online for this particular screening. Reservations can be made by Email to lindner@frauenfilmfestival.eu until 10 a.m. on the day of the screening. You receive a reservation confirmation by sending the contact form or the QR code. Reserved tickets must be picked up 30 minutes before the start of the screening. You can also buy ticket at the box office.

To escape the war raging in Syria, the impulsive Sam Ali flees to neighbouring Lebanon. By chance he meets successful artist and provocateur Jeffrey Godefroy in Beirut, who makes Sam a dubious offer: if he has his back spectacularly tattooed in the form of a Schengen visa, Godefroy will bring him to Europe as a living work of art. Sam wants get to the woman he loves in Brussels, where she has been forced by her family to marry a diplomat. So he agrees. Soon, however, Sam realizes that this may not be the route to freedom that he had hoped.

Director Kaouther Ben Hania has created a brilliant film with a cynical thread, about two worlds colliding: the world of the contemporary art trade and that of political refugees desperate to gain settled safety. The story is loosely inspired by the real-life case of Belgian artist Wim Delvoye who tattooed the back of Swiss man Tim Steiner and sold his ›work‹ (Tim, 2006). The film is a fascinating satire on what can actually be traded in our world and the loss of human dignity.
The Man Who Sold His Skin won awards at Venice International Film Festival and was nominated for Best International Feature Film at the Oscars. 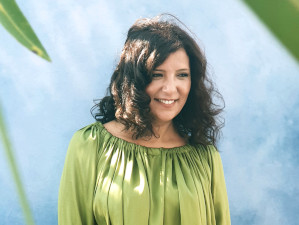 Kaouther Ben Hania, born 1977 in Tunisia, graduated in cinema in Tunis and then studied film dramaturgy at the Sorbonne in Paris. After several short-film successes, her documentary film Les imams vont à l`école 2010 premiered at the International Documentary Film Festival in Amsterdam (IDFA). Her first feature film Challat of Tunis had a strong documentary feel and gained international acclaim. Her second feature film Beauty and the Dogs premiered in 2017 at Cannes Film Festival.