My Name is Baghdad

Baghdad is a 17-year-old skater who lives in Freguesia do Ó, a working-class district in the city of São Paulo, Brazil. She skates with a group of male friends but also spends lots of time with her family and her mother’s friends. She is supported by a network of strong-willed women. When Baghdad meets a group of female skaters, her life suddenly changes. After being sexually assaulted by an acquaintance, she is offered support by the young women and together they campaign for the skatepark to be made a safe place.

»The film My Name is Baghdad was the result of our desire to work with stories and everyday situations experienced by characters from a working-class neighbourhood on the outskirts of São Paulo; it’s a search for the poetry that exists in prosaic situations. We also wanted to make a film with strong, unusual female characters who were empowered by their bonds, creating islands of love and affection in a world that is often hostile towards them.« Caru Alves de Souza
The screening will be followed by a discussion with young female skaters from the Ruhr.

In collaboration with the Mädels* Skate Session of the Skateboardinitiative Dortmund.

suitable for age 14 and above 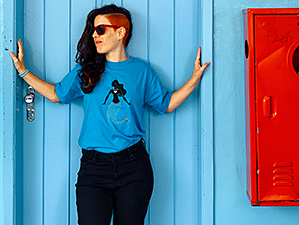 Caru Alves de Souza is a director, scriptwriter and producer. Her debut feature film Underage had its world premiere at the 61st San Sebastian International Film Festival and was awarded Best Film at the Festival do Rio (Rio de Janeiro International Film Festival). She has also directed and scripted the shorts Family Affair and The World of Ulim and Oilut. In 2017, her second feature film as director and scriptwriter, My Name is Baghdad, received a grant from the Tribeca Film Institute’s Latin America Fund for projects in advanced stages of development, and a grant from the Ibermedia Programme’s Development Support in 2015. Alves de Souza has also directed ten episodes of the second season of the television documentary series Causando na Rua for the CINEBRASiLTV channel and two documentaries, Mascarianas and Vestígios, for TV Cultura.

The Name Of The Son