An intimate exploration into how private, domestic acts, such as washing your hair or putting on makeup, become a significant re-acquaintance with the body, before and after navigating the politics of one’s outward appearance. As they get ready for the day, three young Black women discuss the public perception of their Blackness in relation to their cultivation of a strong sense of self.

suitable for age 14 and above 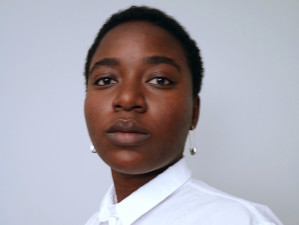 Kourtney Jackson is a Toronto-based writer and film-maker interested in hybridised, experimental forms of storytelling. As a self-taught film-maker, she wrote, directed, and shot her first short film 1 vers[us] 1 in 2018. She won the Emerging Directors Spotlight & Pitch Competition at the Regent Park Film Festival, enabling her to fund and create her second film Wash Day ⎼ an award-winning short documentary for which she earned one of ten 2020 Sundance Ignite Fellowships.

My Name is Baghdad

This website uses cookies to enhance your experience when navigating the site. Cookies classified as "necessary cookies" are stored in your browser as they are essential for the functioning of the basic functions of the website. We also use third-party cookies to help us analyze and understand how you use this website. These cookies are stored in your browser only with your consent and are hereinafter referred to as "Analytical Cookies". You also have the option of rejecting these cookies.
Necessary Always Enabled
These cookies are necessary to enable you to navigate through the pages and use essential functions. They enable basic functions of the website.
Marketing
This website uses the Youtube embedding function to display and play videos from Youtube. We use the extended data protection mode, which, according to the provider, initiates a storage of user information only when the video is played. At the moment when the playback of the embedded video is started, the Youtube sets cookies to collect information about user behavior. According to information from Youtube, these are used, among other things, to collect video statistics, improve user-friendliness and prevent abusive behavior. Translated with www.DeepL.com/Translator (free version)
Analytics
We use Google Analytics on our website to measure visitor, session and campaign data and to track the use of the website for the analysis report of the website. Google Analytics installs cookies for this purpose. The cookies store information anonymously and assign a generated number to identify unique visitors.
Save & Accept