Crying was a powerful reason for making a political film.«
Milan as quoted by Ana in Landscapes of Resistance

Crickets chirping, a playful kitten, an old lady on the sofa: images filled with peace and harmony that create the space for a life story of resistance. Sonja was one of the first female partisans in Yugoslavia. The 97-year-old calmly and articulately recalls her journey that saw her go from being a student reading progressive literature to a resistance fighter who survived Auschwitz. The documentary foregoes archive material, and we rarely actually see Sonja. Instead, we see contemporary landscape images as resonant spaces that leave room for our own thoughts and reflections.

Over a period of ten years, film-maker Marta Popivoda and Sonja’s granddaughter, Ana Vujanović, who also co-authored the film, recorded their conversations with Sonja. As a witness of the times, Sonja’s voice sets the tone for the film. But instead of using historical photos or film footage, the film’s camera shows shots from the current day: meadows and forests, streams and rivers, fabrics and textiles, then repeatedly returning to Sonja with her husband in their small flat in Belgrade. Gradually, Ana’s handwritten diary entries also find their way onto the screen, reflecting the process of the film project as well as Europe’s newly emerging fascism. A cinematic monument and memorial that finds traces of yesterday in today, without simply sinking into despair as a result. 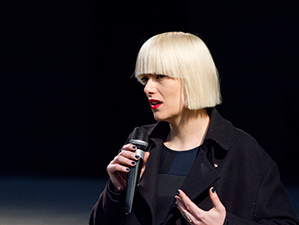 Marta Popivoda, born 1982 in Belgrade, is a film, video and cultural artist. Her work explores tensions between memory and history, collective and individual bodies, as well as ideology and everyday life, with a focus on anti-fascist and feminist potentialities of the Yugoslav socialist project. She lives and works in Berlin and Belgrade.