»We never talked, we’re not going to start now.«
Aïcha in Their Algeria

An old video recording: Zinedine films his daughter Lina and mother Aïcha. Later on, his father Mabrouk, too. »Speak Arabic together, it’s a shame not to!«, says Zinedine. Generally though, his parents hardly speak to each other at all. And little Lina doesn’t understand Arabic.

About 25 years later, it’s Lina holding the camera, trying to unlock her grandparents’ silence. Aïcha is a strong, energetic woman. She has split from her husband after 62 years of marriage, but continues to provide for him. And then there’s Mabrouk, a slim, introverted man who whiles his days away in the café of a shopping centre. Having emigrated from Algeria to France as a young couple, they look back on an eventful life. Lina’s attempts to get her grandparents to talk about their past usually end in nervous laughter or lingering silence. The memories of loss and violence are too painful, they’ve never been seen as really relevant up to now. Lina gently probes away at Aïcha and Mabrouk’s silence, ask questions, reconstructing things and teasing out new angles. »This is a painful memory«, says Mabrouk, when Lina shows him an old photo of his own parents. But when she later returns from her trip to her grandparents’ home village with new photos, Mabrouk’s face lights up. A tender exploration into family memory and a tribute to grandparents whose lives were defined by French colonialism. 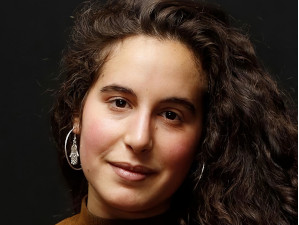 Lina Soualem is a French-Palestinian-Algerian film-maker and actor from Paris. After studying history and political science, she first worked as a journalist and film festival curator. Their Algeria is her debut documentary film.

Ain’t No Time for Women