Home Fest 2021 Timetable Nothing but the Sun

»What was our sin?«
›Mateo‹ Sobode Chiqueno in Nothing but the Sun

›Mateo‹ Sobode Chiqueno is a member of the Ayoreo people. Like many other Ayoreo, he was forcibly driven out of this people’s native territory by religious missionaries in the 1970s. He now lives in an isolated settlement in the Chaco region of Paraguay. Mateo uses his old cassette recorder to tape memories, songs and accounts of the past by other Ayoreo – a form of resistance to the wiping out of a culture.

The film’s partly static images, shimmering in the heat, convey a clear message: arid and dusty landscapes, animal corpses, and fences that must not be crossed. In contrast, the memories of a lost paradise where there is no God or money, without hunger or poverty. As more voices are added, the picture becomes increasingly ambivalent and contradictory. »I’m in the middle of two worlds«, as one Ayoreo puts it. Mateo’s various compatriots can’t always agree on which life is better. Torn between often traumatic memories and the processes of having to adapt, accepting the ›White‹ reality seems the only option for many of them.

Mateo’s interviewing style is calm and pointedly non-judgemental. But underneath you can always sense a slight questioning of the values and dogmas adopted from the missionaries. »When you record something, you are taking care of it, says Mateo’s wife about her husband’s project: an audio archive to combat the forgetting of a past and to question imposed new realities. 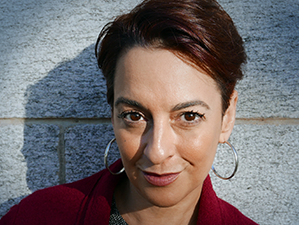 Arami Ullón was born in 1978. She lives and works in Paraguay and Switzerland. Her debut documentary film El tiempo nublado won the 2015 Basel Film Award for best film. The film was also Paraguay’s first ever entry at the Oscars.