Carlotta cannot recognise faces. For her, human faces don’t inspire trust, they are grey places of fear and confusion. She is one of 1% of all humans whose part of the brain that controls face perception doesn’t work properly.
In his film, neuroscientist Valentin Riedl travels through Carlotta’s universe, a place full of anthropomorphic animals, lucid dreams and aberrations. Step by step, he reveals the idiosyncratic strategies Carlotta repeatedly employs in an attempt to follow the flow of human conformity, until one day she decides to leave behind her fellow humans in a self-built boat. Her never-ending search for answers leads her to art – a means through which she begins to relate to herself and to the people around her.

Jury Statement
We see a blurry face, but our eyes cannot rest on it. Slowly, the camera hones in on one eye, only to lose itself again in this grey blurry space. Already in the first shot, Doro Götz allows viewers to experience her protagonist’s special mode of perception. In wonderfully sensual images that demonstrate a subtle feel for perspectives, light and detail, Doro Götz captures this unusual woman’s cosmos, full of empathy and respect. Through her consistent compositional choices, she brings the audience closer to the way Carlotta sees the world.
Doro Götz has also attracted the jury’s attention with another outstanding entry. Benzin shows that the camerawoman is equally skilled at translating protagonists’ feelings into a distinct and strong visual language in narrative films. 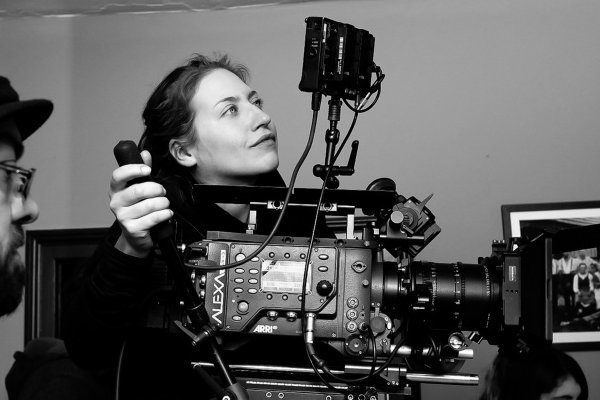 After an internship with ARRI Kamera Rental, Doro Götz (*1985) worked as a second camera assistant. In 2009, she started studying cinematography at HFF Munich. Since then, she has worked as a cinematographer on various feature films, documentaries and commercials. Her graduation film Benzin was nominated for the 2019 FIRST STEPS Award.