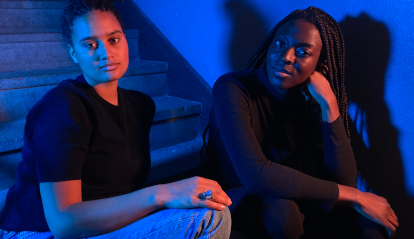 Discussion of the residency fellows of the Fasia Jansen Residency

Since October 2020, Princela Biyaa and Marny Garcia Mommertz have been examining the life of singer-songwriter and peace activist Fasia Jansen. They were awarded the artistic research residency, jointly launched by IFFF Dortmund+Köln and Interkultur Ruhr as part of the initiative behind the Archive for Family and Amateur Film in the Ruhr region.

In this first open-ended research residency on Fasia Jansen, research fellows Biyaa and Mommertz set out to examine the extent to which Fasia Jansen’s life can be understood and analysed from Black German perspectives. During their research, stories and works of Black people who knew Fasia Jansen played a key role in gaining a fuller picture of Black people’s networks in Germany during and after the Second World War.

Discussion event
During the festival we will be holding an evening discussion event with Princela Biyaa and Marny Garcia Mommertz, where the duo will share their experiences from the research residency. They will also present their installation concept (currently in preparation) on another approach to the topic to a group of invited guests.
Host: Fayo Said (Oromia Records) Graphical implementation of the installation concept: Image Alchemy Studio, designed by Samuel Jah.

You can watch the discussion on our Vimeo channel under this link and then talk to the residents in our digital festival lounge later.

Viviane Amsalem spends five years fighting for a divorce. A court drama that examines the relationship between Orthodox and secular […]

Lisa, a rebellious black punk, lives with her gang in a construction trailer on an occupied property. The friends are […]

Workshop: Do you speak film?

What is film language, who speaks it, and how can it help us overcome prejudices? Our workshop “Do you speak […]