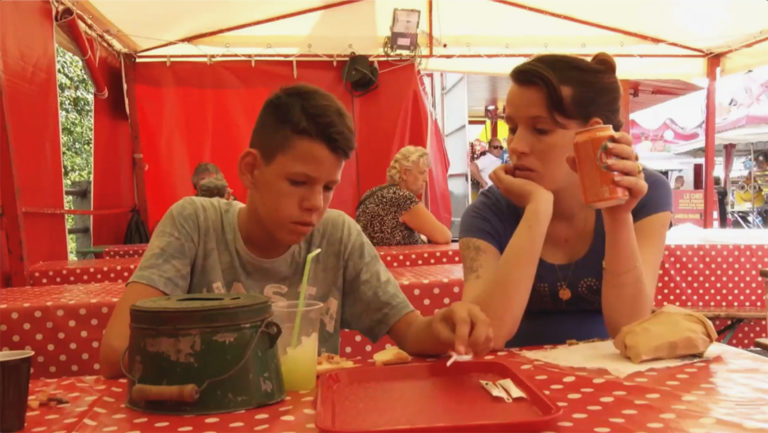 Far from You I Grew is a long-term observation project by French director Marie Dumora, who has been filming the Muller family for over 15 years. The focus is on Nicolas Muller, who was separated from his teenage mother as a young boy and moved to a nearby children’s home in Alsace, from where he now has to find his way back to his family as a teenager.

The film captivates with the careful portrayal of Nicolas, but above all has great metaphorical power; it stands for many aspects of modern lifestyle, such as nomadism, which has gained new meaning through digital media. While so-called ‘digital nomadism’ nowadays describes a ‘hip’ lifestyle of influencers and young globetrotters, Nicolas’ journey is of a different kind. Nicolas’ return to his mother and siblings is compared here with the classic Greek tale of Homer’s Odyssey . But can Nicolas find his way back home or has he become too alienated from his parent’s culture and way of life through the years in the children’s home? Nicolas’ journey is not that of an independent jet-set culture, but has to overcome class, educational, language and cultural barriers.

Nicolas’ story runs parallel to that of Seif Ghommid, a Tunisian refugee boy of the same age who will become a best friend in the Nicolas‘ children’s home. Here the recent migration crisis is subtly woven into the story of our ‘hero’ Nicolas, adding a global dimension to his fate. In the friendship of the two, two geopolitically fundamentally different fates of uprooting find each other and are united in the stories and worries of the two children. Dumora’s understanding of experiences of migration, uprooting and localization is therefore based on solidarity and not on exclusion.

But the most important aspect of Nicolas’ nomadism lies in his family: his great-grandfather was of Yenic descent and his mother is still very close to the culture of the so-called ‘traveling people’. That Nicolas’ mother is reluctant to settle down becomes clear in her admiration for her husband’s truck. And yet she has to bow to the sedentary way of life, even if it leads to difficult circumstances. The social and economic marginalization of Nicolas’ family is neither condemned nor evaluated, but – and this is the core of the film – derived from cultural history and valued, so that the audience not only undertakes a journey from place to place, but also a journey through time, through values, morals, possible prejudices and their overcoming. This sensitive film tells whether and how the youngest generation locates itself between the tradition of traveling merchants and civic education, as well as global waves of migration.