Janaé and Bella are the two protagonists of the film. They want to investigate the shootings of Rekia Boyd and Laquan McDonald in Chicago and bring the perpetrators to justice. The two Black youths were killed by the police. Active in the Black Lives Matter movement, the protagonists campaign against state violence. The film follows them in their political work, during hearings and at university. They organise queer-feminist groups and support different forms of protest. Twenty-four-year-old Janaé Bonsu has come to Chicago to write her doctoral thesis in social work. She joins the Black Youth Project 100 (BYP100), a youth activist organisation that fights against police violence. She has to balance academic work with her political activities. Twenty-two-year-old Bella BAHHS was born in Chicago. She attracted attention with a video of her spoken word performance condemning violence and has become an important figure in Chicago’s BLM movement. The film documents the city’s protests and highlights the remarkable political skills of the two activists. A documentary about the Black Lives Matter movement in Chicago and its young queer feminist leaders. 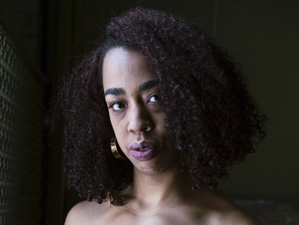 Ashley O’Shay is a Chicago-based cinematographer and documentary film-maker. Her work focuses on giving attention to marginalised voices. In 2019, she co-produced the Chicago episode of If Cities Could Dance, the prize-winning video series from the non-profit media organisation KQED. It is still one of the most frequently viewed episodes. Her work can also be seen in the critically acclaimed Lifetime documentary series Surviving R. Kelly. Unapologetic is O’Shay’s first full-length film.
She is currently associated with the non-profit production firm Kartemquin Films, which specialises in documentaries on social justice and stories about marginalised people.