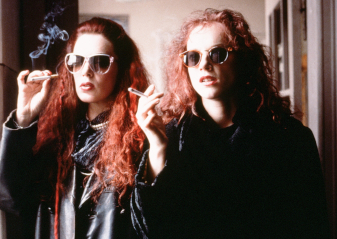 We are happy to announce that our first book publication WAS WIR FILMTEN – Filme von ostdeutschen Regisseurinnen nach 1990 (What We Were Filming – Films by East German Women Directors After 1990) is now out. This book project is a continuation of the film programme After the Reunification: Germany 1990|2020, which the curator Betty Schiel presented at the 2020 festival in Cologne. This unique film programme showed a carefully curated selection of films by women directors from East Germany after the Fall of the Berlin Wall, an important but much ignored chapter in East – West German (film) history.

The book editors, the film curator Betty Schiel and festival director Maxa Zoller, are delighted to invite you to the

Different writers will read excerpts from their essays, which will be followed by a screening of the feature film Herzsprung from 1992 by director Helke Misselwitz (Tickets available via Wolf Kino).

About the book:
Three generations of East German women directors talk about their films made in the years after the German reunification. Their films and words are valuable counter-memories; they do not romanticise the past, nor do they allow for the historical simplification of a period that has been too often overgloryfied in terms of a Western victory over the so-called Unrechtsstaat. This book opens up the space for an overdue investigation of filmmaking in and about this decade from an East German perspective.

This anthology provides eyewitness reports, interviews and detailed film analysis and shows how important the debates of the last three decades are today

Our last year’s focus program is evolving. On the occasion of the reunification celebrations on October 3rd in Halle (Saale), […]