Home Fest 2021 Timetable One in a Thousand

One in a Thousand

Iris is 17 years old. Expelled from school, she spends her days in the streets of the »Las Mil« social housing project. Her two cousins live there too. They explore friendship and sexuality using chats and dating apps, and challenge heteronormative society. In the rear courtyards, this young queer community creates its own milieu, and the nights are all theirs. Iris is actually a bit too shy for this scene, but her life is lacking direction right now. When not hanging out with Dario and Ale, she dribbles a basketball around the estate. Then Renata appears. She’s a bit younger than Iris, but oozes urban cool. Her reputation precedes her in the neighbourhood, and there’s even talk of HIV. The two start to flirt, excited but shy at the same time, each greatly interested in the other, all played out against a backdrop of vitality and latent violence. Adults are no more than a marginal presence.

Casually, almost hovering above, Clarisa Navas tells this tale of growing up encompassing coming out and cyberbullying, and in which the architecture is almost a character itself. In long uncut sequences, the film explores the young voices and bodies. With documentary-like images, Navas portrays an almost typical coming-of-age story in Corrientes, the poor northern part of Argentina. 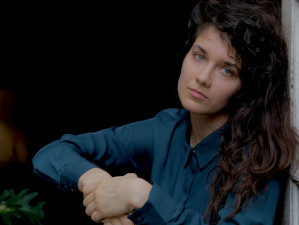 Clarisa Navas, born 1989, grew up in Corrientes, Argentina, and graduated in fine art from the National University of the Arts (UNA) in Buenos Aires. Her debut feature film, Today, Match at 3, appeared at festivals in Bafici, Biarritz, Lima and Valladolid. Navas has written and directed several series and documentaries for Argentine digital television. She is a lecturer and tutor at the National School of Cinematographic Experimentation and Production (ENERC), which is part of National Institute of Cinema and Audiovisual Arts in Buenos Aires, and at the National University of the Northeast. One in a Thousand opened the Panorama programme at the 70th Berlinale in 2020, and is her second feature film.