To escape the armed conflict in Colombia, Amparo and her children Nuria and Fabio move to an island in the Amazon. Amparo has lost her husband and a child in the civil war and hopes to emigrate to Brazil. Like many other refugees, Amparo has to fight for a residence permit. She is only entitled to reparations if her two dead relatives are found. Her place of refuge is called »Isla de la Fantasía«. The residents tell stories about ghosts that mingle amongst the people and enter their bodies. One day, Nuria and Fabio’s father seems to reappear …
This island in Amazonia, where Brazil, Colombia and Peru meet, really does exist. Beatriz Seigner has studied the culture of the indigenous people there, and recorded the fluorescent colours, rituals and sounds of the rainforest. This is how she makes the victims of the civil war atmospherically visible and audible. In semi-documentary sequences, she filmed village gatherings with amateur actors who were themselves affected by the war and who now lend their voices to the disappeared. They present their experiences in public for the first time. In impressive rituals, the islanders give their »spirits« a place in society again. In her second feature film Seigner examines various borderline experiences: not only the borders between Brazil, Colombia and Peru, but also the borders between the living and the dead, between land and river, documentary and fiction, ghosts and realism. (SH) 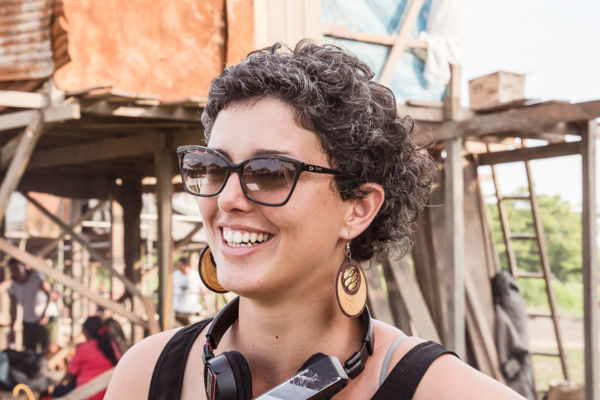 Beatriz Seigner is a Brazilian screenwriter and director. In 2009, she directed Bollywood Dream, the first co-production between Brazil and India, which was shown at over 20 international film festivals (Busan, Tokyo, Paris, Los Angeles, São Paulo…). Los silencios (2018) is her second feature film. Her documentary film Between Us, A Secret about West African griots, or entertainers, is currently in post-production. She is also co-writing the screenplay for Walter Salles’s new film La contadora de películas.